Visit with local artists and vendors in the TPL artist alley

This is an all-ages event, so please refrain from excessively revealing cosplays or realistic weapons of any sort.

Follow us on twitter @Yomu_Con for updates, guest announcements as soon as they are confirmed, and answers to your questions.

Sonny Strait had to cancel due to an emergency recording session for a movie. TPL is sorry and Sonny will be missed.

Don Teems is a D.J. and actor from Atlanta, Georgia. His work includes being a regular member of the undead on AMC’s The Walking Dead.  He is also known for work on The CW’s The Vampire Diaries and The Hunger Games: Catching Fire, among other various TV and movie projects. He can be seen DJing at various clubs in the Atlanta area playing everything that makes you move from all genres.

E G Glover began his indie author writing career with The Fear Series (Paranormal Romance), which is written and published with co-author,

A year later, Glover released his first solo work, The Mystery Hill Series (Gothic/Time Travel Romance), which has sold in several countries around the world.

Glover flirted with idea of writing in high school by authoring various poems and short stories, but it wasn’t until recently that his dream of writing a novel became a reality.

Born and raised in northwest Alabama, Glover hopes his writing will prove a romantic story can be told with a male’s point of view entwined, and still hold its romanticism. 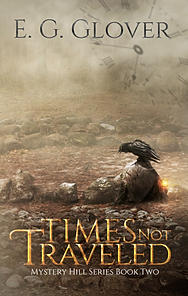 Ingrid Seymour is the author of Ignite The Shadows (Harper Voyager, April 23, 2015). When she’s not writing books, she spends her time working as a software engineer, cooking exotic recipes, hanging out with her family and working out. She writes young adult and new adult fiction in a variety of genres, including Sci-Fi, urban fantasy, romance, paranormal and horror.

Her favorite outings involve a trip to the library or bookstore where she immediately gravitates toward the YA section. She’s an avid reader and fangirl of many amazing books. She is a dreamer and a fighter who believes perseverance and hard work can make dreams come true.

She lives in Birmingham, AL with her husband, two kids and a cat named Mimi.

A.G. Porter is the author of The Darkness Trilogy, a YA Paranormal Thriller. She is an Independent Author (Indie Author) who enjoys writing scary stories as much as she loves reading them. Currently, A.G. is working on the last book in the trilogy. When she isn’t writing, she’s either taking pictures, reading, making nerdy jewelry, watching movies or spending much needed time with her family. A.G. lives in New Hope, Alabama with her husband, Billy, stepson, Brenton, and their 4 dogs.
A.G. enjoys writing stories about real people in supernatural situations. She also puts a lot of her faith into her books because she knows that without Christ she is lost and without God she is nothing.

ELLIE COLLINS was born and raised in Huntsville, AL. She was always artistic and creative, but in her high school days she discovered a deep love for the theater and costuming. Since then she’s created over one hundred costumes for herself and other actors and cosplayers. She’s won numerous awards, and has even been featured in magazines for her costuming work. Also, she has gone on to do seamstress work for film and television.

On top of her costuming work for screen, she has worked both in front of and behind the camera. Whether it be assistant directing, wardrobe, or even acting, she finds herself happy in all parts of film making. However, acting still remains her first love. She was featured on the first season of The CW’s “The Originals” as a recurring DayWalker vampire. It was a season she credits with reigniting her passion for all things creative.

Ellie has gone on to write “Empire Valley”. It was an idea she had mulled around for many years, then the drive to write finally came with 2011’s National Novel Writing Month (NaNoWriMo), where she wrote 50,000 words in the month of November. Since then, each year she participates and encourages others to participate in NaNoWriMo and follow their writing dreams.

A. B. England is the author of Right of Succession and, new release, Daydreams and Myth. Her work encompasses a range of genres under the speculative fiction umbrella including fantasy, post-apocalyptic, science fiction, and historical fantasy.

England is also the artisan behind Contented Comfort. Frustrated by her family’s troubles with commercial soaps, she tried making her own and fell in love with the process. She opened Contented Comfort in January 2011, and she went on to discover a knack for perfuming in the process. Pulling on her and her family’s love of science fiction and fantasy, England has designed more than thirty original perfumes and colognes inspired by characters from a wide range of series.

She lives with her husband and two children in Athens, AL.

Andy Gray is a published illustrator and experienced graphic/web designer, with a background in animation.

Disney, anime, Broadway, top 40: Caleb Hyles has done it all when it comes to cover songs! With his big heart, and even bigger voice, Caleb has wowed millions across the globe with a multitude of musical stylings and an infectious, positive attitude. Caleb Hyles has a history in musical theatre, having grown up in a family of musicians and thespians. There was no doubt that Caleb was born to be an entertainer of some kind!

Caleb Hyles has been recognized by the likes of Ryan Seacrest, Tyler Oakley, Peter Hollens, and many others for his musical prowess. Ever since his viral hit, “Let It Go”, dropped in 2014 Caleb has not stopped growing his YouTube channel which is on the precipice of reaching 200k subscribers. By holding Live Q&A’s, and random “Skype Nights” with fans, Caleb has nurtured a growing community centered around one-on-one interaction and a common love for all things music. No other performer, or YouTube personality does as much for his fans as Caleb does. He continues to produce new content on a weekly basis and is looking to expand his YouTube channel once he reaches 200k subscribers. Big things are happening with Caleb Hyles, and he hopes that anyone and everyone will join him for the ride. As Caleb says at the end of every video, “Peace, love, and metal!!”